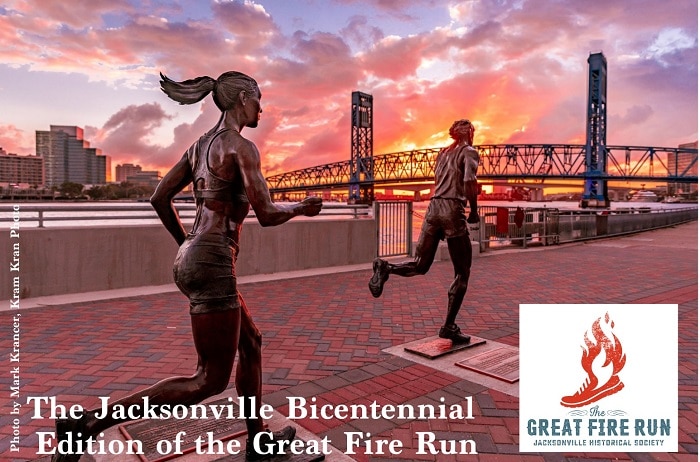 The Jacksonville Historical Society is pleased to announce Firehouse Subs is the title sponsor of the 2nd Annual Great Fire Run (2022), a 5K and 1 Mile race to commemorate the anniversary of Jacksonville’s Great Fire. During that 1901 conflagration, brave men from Fire Company 1 were on the frontlines of the fiery battle, so it is fitting that Firehouse Subs is sponsoring the race for the second year in a row. Additional sponsors include companies which survived the Great Fire of 1901: Bedell, Dittmar, DeVault, Pillans and Coxe, P.A., Marks Gray P.A., and Wells & Drew Printing, along with relative newcomers Means Engineering, Manifest Distilling, Milam Howard Nicandri & Gillam P.A., Pajcic & Pajcic, Champion Brands, and the Greater Jacksonville Agricultural Fair. Now it’s time to light a fire under your feet and sign up for the Great Fire Run, to be held Saturday, May 7, 2022. The event begins and ends at Old St. Andrew’s Church, 317 A. Philip Randolph Blvd., across from VyStar Veterans Memorial Arena. The 5K will start at 7:30 a.m., followed by the 1 Mile Run at 8:30 a.m. Sign up at runsignup.com and search for Great Fire Run. Runners who register at least two weeks prior to the event are guaranteed a T-shirt; otherwise, shirts available as supplies permit. The massive conflagration occurred May 3, 1901, when a spark from a kitchen fire ignited piles of drying Spanish moss at a nearby mattress factory. Smoke from the Great Fire could be seen as far north as Savannah, Georgia and it took City firefighters until 8:30 that night to get it under control, but not before the 146-block conflagration destroyed 2,368 buildings, left 10,000 people homeless and killed seven residents. The race will follow the outline of the Great Fire boundary, which began at Davis and Beaver Streets, spread to most of downtown Jacksonville, and was halted by Hogan’s Creek, thus sparing Old St. Luke’s Hospital, which now houses the offices and archives of the Jacksonville Historical Society. For more information about this topic, call (904) 665-0064 or email